Spain - A Gamble Friendly Country Since 2012

Online slot games didn’t have the same luck as other games and were illegal until 2014 when a new law made it possible for online casinos in Spain to have a license for slot games. Since then, 10 new gambling operators received permits, in addition to 20 of the current ones who were allowed to offer slots to their customers.

In the past, Spanish residents gambled at foreign casinos, but with the new legislation, those who want to play slots will have to choose a casino which is licensed in Span. That is great in itself because people don’t have to worry if it’s legal or not to use the casino due to the fact that an organization regulates it.

The History of Online Casinos in Spain

Even though the Spanish are relatively liberal when it comes to gambling, online betting wasn’t immediately accepted there. In fact, you can still find restrictions on games such as poker.

Even though gambling in brick-and-mortar casinos became legal in 1977, the industry reached its peak much later. The government decided in 2008 that the country would be split into seventeen different regions, and each of them was responsible for handing out licenses. That was a great decision which led to the creation of more than 40 casinos in the country.

Online gambling was legal since 2006, but in 2010 the authorities of the different regions had a meeting with the National Gaming Board where online gambling regulations were discussed. Thanks to the new law from 2011, online gaming (except National Lottery, Bingo, and live in-play betting) was allowed. Operators had to receive an individual gaming license for each title, and you could only get a permit if your servers were hosted in the country, and the domain name ended in .es.

The Gambling Act made it illegal for betting sites to advertise themselves or other gambling activities if they didn’t have the correct licenses. Spanish authorities were allowed to fine those who tried to bypass their laws. Even though such measures were unsuccessful in countries like Portugal and France, more than 50 gambling websites withdrew from providing their services to Spanish gamblers, and those who didn’t, were sued.

Difficulties for Poker Players at Online Casinos in Spain 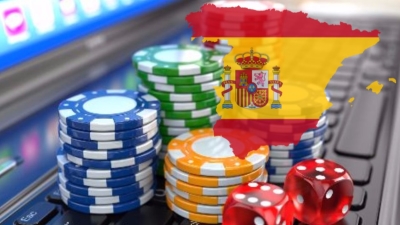 Unfortunately for poker fans, they can’t enjoy all the pleasures that this game provides due to the strict legislation. Spanish gamblers can play only against other Spanish players and aren’t allowed to participate in big international competitions. The situation is the same in countries such as Italy and France.

Of course, the game suffered a lot from that, and more than fifty percent of poker players are using illegal websites. Instead of improving the situation, these laws led to playing having to use unregulated sites so that they can enjoy their favorite game.

There was a drop of 5% in revenue from the poker market, which is terrible when compared to the 14% growth of the overall online betting market. The best performers are sports betting with 20% and table games with 38%. Until the government loosens up on some of the regulations, this trend will continue, and Spanish gamblers will choose foreign websites to play poker.

The Introduction of Slot Games at Online Casinos in Spain

Fortunately, slot games don’t face the same restrictions like poker, so many large gambling operators are willing to dip their toes into the betting market. Slots are responsible for a lot of the growth in the gambling sector across whole Europe, so the Spanish government decided to take advantage of the situation and follow the example of Italy where 20% of the gambling revenue came from slots.

However, slot players aren’t concerned with such details – they only want to have a wider choice when it comes to slot games, and are enjoying when there is more competition. The big names in the gambling industry that already were established in Spain quickly added slots to their portfolios. All of the betting operators want new customers, so Spanish gamblers should be treated to great welcome bonuses, promotions, and free spins.

Playing for Real Money at Online Casinos in Spain

Considering that the Euro ranks amongst some of the most valuable currencies worldwide and it’s also accepted almost at all reputable casinos, it becomes worth it to go the extra mile to find a casino where you can use Euros.

First of all, you won’t have to pay any conversion fees, which is great. Gamblers need to find Spanish casinos which accept payments made in Euros. Of course, there is always the option of using currency conversion, but since there are a lot of online Spanish casinos which allow deposits and withdrawals to be made using the Euro, we don’t see why you shouldn’t use one of them instead of paying more when converting the currency.